Voted the Best Place to Live in Georgia in 2016, by Money Magazine, the East Cobb Blog wants to know…exactly where is East Cobb?  Families with children move to this area to take advantage of some of the best public schools in Georgia, just one of the multitude of factors that have been used to grade the quality of life here.

East Cobb is a Northwestern suburb of Atlanta and home to over 200,000 residents. It is administered by Cobb County government and is unincorporated, consisting of Districts 2 & 3 of the Cobb County Commission. According to East Cobb News, “If the East Cobb-area ZIP codes were incorporated, their present population of 205,763 would constitute the second-largest city in the metro region behind the city of Atlanta.”

East Cobb’s boundaries are roughly Cherokee County to the north, Fulton County and Roswell to the northeast, the Chattahoochee River and Sandy Springs, Fulton County on the southeast, I-285 and Cumberland/Galleria to the south, and Bells Ferry Rd, I-575, Marietta City Limits, I-75 to the west. The zip codes for East Cobb are 30062, 30066, 30067, 30068, 30075. The Cobb County School website suggests contacting their transportation department or using their online school and bus stop locator before purchasing a home because various portions of the same zip code can serve different schools. 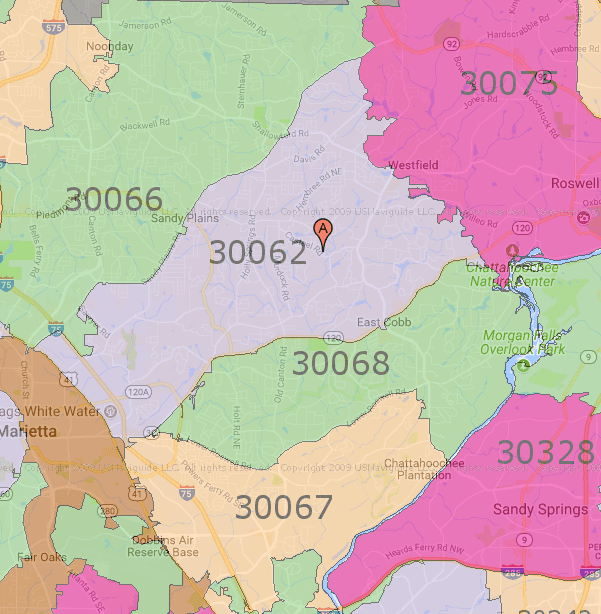 East Cobb became a favorite suburb of the Metro Atlanta counties due to the fact that it borders Fulton County and for it proximity to I-75, I-285, Sandy Springs, Roswell, and the Perimeter area. East Cobb development began in the 1960’s, but the area really took off in the late 1970s through the early 2000s. East Cobb architecture ranges from traditional  ranches from the 1960s and 1970s to cedar style homes of the 1970s and 1980s to gorgeous traditional homes reflecting classic southern architecture.

East Cobb Schools and low property tax rates continue to make this community a favorite of Metro Atlanta. Walton, Lassiter and Pope high schools consistently stand out for academic excellence, with all three schools ranking in the top 25 high schools for Georgia according to SchoolDigger. Elementary and middle schools in East Cobb provide top notch learning with a close knit community feel. In all schools arts, sports, and extracurricular activities are varied and numerous.

The Chattahoochee River National Park has miles of hiking and biking, canoeing, kayaking, paddleboarding, and fishing.  East Cobb Park, located on Roswell Road, is a community favorite that is a result of the Friends of East Cobb Park and a partnership with Cobb County. Check out the Cobb County Government website to find other parks in the Eastern District.

Aside from statistical measurements, there are many intangible perks that come with calling East Cobb home. Money Magazine interviewed residents about factors that could not be calculated and named East Cobb Georgia’s best place to live. Perhaps it’s these immeasurable things that are the most important to people here in East Cobb, and that is why they are happy to call it home.